Today, I have the bubbly and witty Destiny Romance author, Imelda Evans. I've know Imelda for a number of years via Romance Writers of Australia. I believe I  met her in person in Brisbane back in 2009 and it's always a party when she's around.

I wanna know what love is – or why I write romance

Hello. My name is Imelda and I am a Romance Writer.

I don’t write only romance. Over the years I have written many things: essays, magazine articles, newsletters, brochures, ads, websites, stories for telling, stage shows, some fairly ordinary poetry and some excruciatingly bad songs. I am also working on a genre-bending crime and women’s fiction hybrid which I’m quite fond of.

But as far as published work goes, I write romance. And sometimes I am asked why.

The first is from people who don’t read romance, mostly because they have bought into the stereotype of it being trashy. To them, I answer that romance is far and away the biggest selling genre of fiction. Interestingly, I notice that the men I say this to tend to accept it as a complete and quite satisfactory answer.

To those who need more, I say that I like the challenge of romance. I explain that Romance readers are a widely-read, erudite and exacting audience who love books and who wouldn’t want to write for an audience like that? Most reasonable people then say that maybe they should look into it then, whereupon I recommend some good authors and we part with mutual satisfaction.

The second argument has the added benefit of also shutting up the unreasonable, persistent ‘trash’-talkers, as no-one wants to class themselves as narrow, ignorant and uncritical readers. I call it the ‘Emperor’s New Clothes’ factor. Feel free to borrow it. It helps, in situations like this, to know your fairy tales. *grin*

The second variety of question is from fans of the genre who genuinely want to know and for them (you, really, since I’m sure all the readers of this blog fall into that category) I have been building up a more complete answer because it’s a question that interests me too.

Part of the answer is in this old pop classic from which I have borrowed the title to this piece:


foreigner - i want to know what love is by kareem93


In a nutshell, that really is it. I wanna know what love is. But that’s a short and fairly glib answer, so if you bear with me, I’ll try to explain.

One of the main reasons I write romance is that I like its values.

One of the earliest things I discovered about being a writer of fiction is that is not possible to do this job without your emotional slip showing.

By that, I mean that, when you dig into yourself to find characters, to make them real and tell the truth as you see it, you can’t avoid exposing what you think is important and how you see the world. I think it was Jenny Cruisie (great author, look her up if you haven’t read her) who said in a workshop I did once, that if anyone wanted to know her they just had to read her books. It was all there.

And it’s true. To create fiction, you have to care about what you are writing about. And I care about love. I believe that love can truly transform people and their lives. I believe that sustaining love in a tough world is one of the greatest adventures that we can go on and one of the most worthwhile. Money may make the world go around, but love makes it worth living in.

I also like that romance has, for the most part, always been a genre written by women, for women. It’s an art form that is unashamed in its prioritising of women’s worldview, women’s issues and women’s pleasure. The world I and my daughter live in sometimes – nay, sadly, often – horrifies me with its misogyny. A genre of fiction that celebrates women, their lives, their strengths, their way of thinking and doing things is still very much needed and deserving of the stoutest of defence.

I should add here that I don’t for one minute think that love is only, primarily or predominantly a female concern. Men need and value love just as much; I believe that wholeheartedly. And I don’t think they’re as averse to seeing it in their entertainment as some would have us believe. But this weird society we’ve created is as limiting for men in some ways as it is for women. They’re not supposed to be interested in love and love stories. So if society is to have stories of love preserved and perpetuated, for the time being at least, it’s down to women to do it.

And I believe very strongly that society needs these stories.

Societies have always used stories to share what they value, to reinforce what’s right and should be rewarded, what’s dangerous and should be avoided, what’s risky but can be fun and what’s bad and should be punished. When stories were told around the fire, they were not just entertainment, but vital tools for creating societal norms, cultural bonding and cohesion.

In modern times, we gather instead around the TV. The TV is not bad in itself. It can, indeed, be a great disseminator of stories that do all the things I mentioned above. But when all our stories come from the tele, we get a story diet that is heavily skewed by the interests of advertisers. Again, advertising is not bad in itself, but it’s interests are not in societal bonding and cohesion and function. They are in selling. And when that is the only source of stories, what happens to cultural values?

They go very skew-wiff. They get, in the modern parlance, messed up, and tend not to reflect what most people feel, deep down, is right – or at least not enough.

In this environment, stories that celebrate love, self-knowledge, self-actualisation, care for others, moral decision-making and the like – stories like romances – are a vital counterpoint.

I want to see those stories. I want to see stories of love. I want to see people who haven’t found love work out why and release themselves so they can. I want everyone to have a happy ending. And if I can work them out for my characters, broken, misguided, trapped or just blind as they are, maybe people can do it in the real world, too.

And wouldn’t that be a good thing?

So I guess, in short, I write romantic books for the same reason that Forgeigner wrote the song. The same reason why the world never tires of Jane Austen adaptations and why, in the butchest of movies, there is always room for a love interest.

I wanna know what love is – and I want the stories to show me. What about you?

You can check out Imelda's ARRA Finalist book, Rules Are For Breaking. 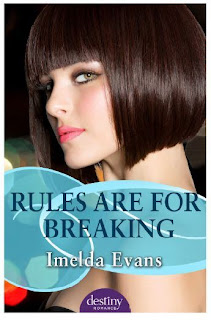 Jo is a smart and determined young woman with a clear-eyed view of men and what she expects of them. Put simply, she is over searching for 'The One'. When challenged by a friend who thinks she can't do it, Jo goes one step further and vows not to date, sleep with or even kiss a man for six weeks.

Enter Declan, Jo's gorgeous yet unwelcome house guest. Convinced he can win her over, Declan views Jo and her vow as an irresistible challenge.

An infuriated Jo declares that Declan is like all the others – attracted to her for all the wrong reasons. She insists that he devote time to getting to know the real her and to doing the things she loves. Will Declan survive the test? Or will a major misunderstanding spoil everything?

Rules Are For Breaking is a witty, entertaining romance certain to have even the most disenchanted believing in love again.

Posted by Eleni Konstantine at 07:00

What a great post in which you describe why the romance genre is worthwhile. It got me thinking and I realised every novel tha's made a lasting impression and resonated with me since I first began reading, has had a relationship as central to its plot. I realise too that lately I've neglected the romance genre...must rectify this! :)

I like that comment that romance books are a woman's worldview. Sure we all know that, but don't consciously bring that to the fore.

Wow! Love it Imelda-as always very insightful! Your thoughts on the marketing pull of television programs got me particularly thinking.
D

That was a really insightful piece, Imelda, which has armed me with ammunition for future dinner parties (once the kids grow up and those days return:))

Hi Imelda,
You always manage to get me thinking. And thanks for the reminder how much I LOVE Foreigner's I Want To Know What Love Is!! I'll be playing it over and over :)

Thanks for having Imelda on your blog, Eleni!!

Thanks Imelda. A really thoughtful post which gives us much food for thought, and pride in our genre with its social benefits and women's overview. I'm keeping this one to re-read!
Cheers, Susanne

Thank you ladies for your feedback! I didn't know where I was going when I started this piece, but it seems half a lifetime of telling stories (and therefore thinking about them) has given me some ideas about them.

And Serena, I had to use that song. The number of times it has popped into my head when I'm writing! I think it comes from writing contemporaries. In the modern world, there aren't many societal forces keeping people apart - but something is, or there'd be more happy marriages! So it's a bit of an ongoing theme in my stories!

I'm glad you enjoyed it and please, feel free to use whatever is useful and share the post!

I'm intrigued by this genre-bending crime and women’s fiction hybrid of yours, Imelda! (I'm a Janet Evanovich fan hehe.) And I'm partial to Foreigner ditties too!

I'd love to think that my Holly might be thought of in the same breath as Stephanie! Glad you enjoyed the foreigner!

What a wonderful and thought provoking post. Well said. Bravo!

Thanks, Effie! Glad you liked it!

It's taken me a few days to get to this post Imelda and I'm compelled to tell you how much I enjoyed it. It's a fascinating thing, this romance genre. Your comments about women's worldviews in the writing particularly relevant and worthy. It leads me to wonder, does feminism have a role in romacnce?

That's a big question, Kate and one much discussed and disagreed over, now, in the past and I suspect long into the future. There is so much disagreement on what constitutes 'feminist', it will always be vexed. However, having got that out of the way, I think it is arguably feminist in essence, just because it is by and for women and unashamedly so. Glad you enjoyed the post!