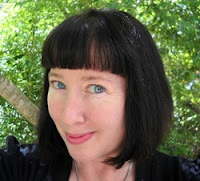 Your Musa debut release is Between (congratulations!).  Can you describe this book for us?

BETWEEN is a paranormal with ghosts, guardians and death spirits. It has strong themes of redemption and laced with historical aspects from the 1349 black plague of Ireland.

As a young girl, Lucinda was able to see spirits, a gift that didn't come without its problems. Now, a dedicated young veterinarian, she is committed to the idea that every life can be saved.

After a devastating accident, Lucinda tries to escape her past by moving to a small town. There, she meets a newcomer and feels an immediate connection with him. But there is another mysterious stranger to the small town, one that stirs within her a mixture of unease and desire.

As Lucinda is drawn into a bitter tug-a-war from the forces around her, she is likewise pulled into a dangerous twist of past and present events. Forced to make difficult choices, she finds that the two men are locked in not only a battle for her life...but a battle for their salvation.

Please tell us a little about your road to publication.

I've always written stories, ever since I was a kid. I was lucky enough to have teachers along the way that encouraged me. In high school, I wrote a one-act horror play that won first place in the Alberta High School Drama Festival. In college, I had two short stories, PIGEONS and THE ROPE, published in the literary magazine, Susurrus. My non-fiction piece, A WAY OF LIFE, was published in the Sacramento Bee newspaper. After the birth of my first child, I pulled out a short story I had written in one of my mythology classes and started to build on it. Ten years later, because raising children takes precedence, I published my fantasy, PRADEE. It’s been an interesting journey.

What attracted you to the paranormal genre?

I was working on the second book in my PRADEE fantasy series and was hit with two characters that definitely didn't fit. I kept setting them aside but they wouldn't leave me alone. Eventually, I gave up what I was working on and started writing BETWEEN. I had the rough draft in a month, the finished novel a year later, and it was accepted for publication two months after that.

Are you a plotter? Pantser? Or somewhere in between?

Panster all the way. I've tried to plan/plot things out, but I find that it silences my characters and stops the story from flowing.

What are you working on now? And what’s in the near future for Clarissa Johal?

I'm working on my next novel titled, STRUCK. It's a paranormal horror and came to me as a single character and scene that kept replaying in my head over and over. I built on it from there. The characters are very quirky but the premise is a bit darker than BETWEEN. I love writing the paranormal genre--I have so many ideas that come to me, I can't get them down fast enough.

What is your favourite part of the process of writing?

What are you currently reading?

I'm reading six different books right now. I can't read in my genre while I'm writing, because I find it's too distracting for some reason, so I'm reading everything from a sci-fi, Captive by the Fog by Laura Hardgrave, to a folklore and mythology book, Walking with the Green Man by Bob Curran. Last night I picked up The History of Magic by Kurt Seligmann and started reading that too. This morning I started re-reading one of my primatology text books from university. Too many books.

~~~
Thanks, Clarissa. Here is a little bit more about Clarissa and her web hangouts.

Clarissa Johal has worked as a veterinary assistant, zoo-keeper aide and vegetarian chef. Writing has always been her passion. When she’s not listening to the ghosts in her head, she’s dancing or taking photographs of gargoyles.
Clarissa shares her life with her husband, two daughters and every stray animal that darkens the doorstep. One day, she expects that a wayward troll will wander into her yard, but that hasn’t happened yet.

Posted by Eleni Konstantine at 09:30

Six books at the same time! Crikey I am impressed Clarissa :)

'Struck' is a great title! for your new release.

Love what you said about what you like about the writing process - making readers happy! That's why we're in this biz! Cheers and best wishes in all your publishing endeavors!

Thanks Susan and Sharon! Happy writing to you both :)

Loved BETWEEN! Happy to hear there's more to come!

Clarissa, I'm with you with the multiple book thing - I can't seem to read one book at a time any more and I think by reading different books and genres, it helps with not accidentally copying an author's voice.

Though I tend to stick to fiction. It's been a while since I've done the non-fiction thing (outside study, of course).

Looking forward to reading Between!