It's been a long time since I've shared a flash fiction story on my blog.

Dragon's Quest was published originally by Antipodean SF,  Issue 156, June 2011. There is a podcast also available of this in Show 156 Delta (read by yours truly at around 19.02). 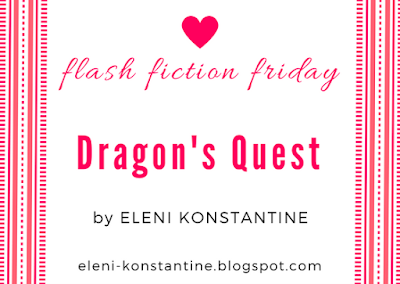 News of the dragon's capture reached the castle. But not of who had caught the elusive beast. The Prince of Renu? The Lord of Rawry? Or any of the other dozen in pursuit?

The Steward Mikhail waited, hoping this ridiculous show would cease. He kept this to himself. Here on assignment, he would see it through. For the sake of the dragon.

Over the next day, many of the pursuers trotted back to the castle — but not the one he waited for.

"Mikhail, what ails you?"

Caught off-guard, he schooled his features. "Nothing of import, Sire."

King Patrik raised his bushy eyebrows. "I know you and my daughter are firm friends."

Mikhail inclined his head. "Indeed. With all these men vying for her hand, and a dragon on the loose..." He trailed off, for the first time finding it hard to speak.

The King gave him a sad smile. "I understand, Mikhail. But the law is the law. Anyone who captures the dragon has her hand in marriage." He hastily looked away.

Mikhail bit back a growl. Another stupid law in these lands. Women not being able to choose their spouses. Two of his passions were out there, and he could do nothing. As Steward, his place was by the king's side, not part of the horde of pursuers.

That evening a flurry of excitement came with a request for an audience with the king about the dragon. Almost immediately, the hooded figure was granted access to the Great Hall.

"My Liege, I present to you Ellia of the Spirint Clan," said a low voice.

A united gasp filled the room as the figure opened its robe, and a small animal the size of a newborn pup jumped onto an outstretched hand. Dazzling colours fluttered around the room, almost too bright to look at.

"What is that?" King Patrik's eyes widened with wonder.

"This, my dear father, is the dragon everyone has been seeking."

Another audible gasp sounded around the room as Princess Truen revealed herself.

"Truen? You are meant to be safe in the summer home."

Truen flashed a smile. "Oh father, you are sweet, but Ellia was never dangerous."

The King cleared his throat. "But all those sightings?"

Mikhail stepped up. "If I could explain, Your Majesty. Dragons have the ability to project a larger image when threatened."

"Father, they need our protection. Mikhail has taught me the ways of old, when dragons were respected in this land."

The King rose and stepped forward, looking from Truen to Mikhail, his eyes twinkling. "Then, my dear, you have the choice of whom you wish to marry. After all, the law is the law."

There was scuffling as the crowd vied for her attention.

Truen smiled and her eyes landed on Mikhail, brightening. "I have made my choice."

"Good for you, princess," Ellia said, leaving everyone except Mikhail and Truen agape.

Hope you enjoyed this!

If you like short fiction of a speculative nature, why not check out Antipodean SF.

Posted by Eleni Konstantine at 10:30