Basically, Bo's a succubus who doesn't want to lose sides between the light and dark fae, as she's been on her own all her life. She tries to unravel the mystery of why her mother left her, and helps the fae with their problems. With the help of pickpocket Kensi (a human), she tries to make sense of this new world.

It's a pretty good paranormal series, and it has humour as well, which is always a good draw card. It's a Canadian production, and I believe it's been picked up for season 3, so that's good news.

Season 2 has started up on SciFi - too bad I missed the first two episodes in the season because I haven't been watching much TV lately. 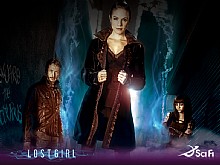